Does the theater increase empathy?

FROM THE PERSPECTIVE OF THE RUBBER HAND.

At the Toihaus Theater the senses are turned upside down with Cornelia Böhnisch's EMPATHY WITH A RUBBER HAND. Exciting experimental set-up from the Uncanny Valley.

Habit junkies and touch phobics have to be tough now. Metaphorically speaking, of course. Because the Toihaus Theater in Salzburg demonstrates with its first premiere in the new season, it has turned the time. Instead of the usual 8:02 p.m., the performances at the most experimental address on the square recently started at 7:30 p.m. It is important to memorize this so that the viewer does not open too late. That would be a shame and brings us straight to the touch phobics. It is a good thing that the performers and musicians of EMPATHIE MITER RUMMIHAND have no contact problems. In this case, that would be very cumbersome, after all, close contact is very important on the EMPATHIE stage.

In 1970, the Japanese robotist Masahiro Mori discovered an exciting effect: the Uncanny Valley or the so-called 'creepy pit'. Humans have a natural antipathy towards avatars, robots or zombies, the more human they seem. Strangely enough, at the same time, they are drawn to highly abstract, completely artificial figures. The Ducktales versus The Walking Dead? The undead can pack up, Dagobert and his nephews can win - and big. The acceptance towards avatars, robots or zombies only takes effect when the imitation can no longer be distinguished from humans. On the other hand there is the rubber hand illusion: Next to the real hand there is a rubber hand. The test person does not see his own, the leader caresses both hands. If he does this long enough, the test subject will accept and feel the artificial variant as his own hand.

The Uncanny Valley theory forms the basis of EMPATHY WITH A RUBBER HAND, the rubber hand illusion contributes the haptic aspect and the audience evaluates the experimental arrangement (idea, direction, choreography: Cornelia Böhnisch, room: Paul Horn). The setting for this is a bizarre laboratory: at the mixer there is a Janus-headed DJ (Nic Lloyd) who suddenly has several hands growing. The toilet paper gently ropes down from the stage sky, walls fall silently to the floor and there is a hint of popcorn above the ambience. In fact, the senses of the audience are led astray. Nothing is in the Toihaus Theater's in-house production, it seems, and expectations are artfully built up in order to then confidently negate them with reduced gestures.

Little is spoken in the empathic series of experiments. Rhetorically, #metoo discourses seem to have been incorporated. “Yes”, “no”, “maybe” - with the big difference that the answers are also taken into account. The DJ not only puts on records, but also himself. On the stage floor. 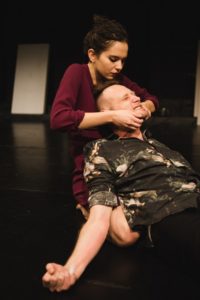 The performers (Elena Francalanci, Lisa Magnan & Pascale Staudenbauer) are grouped around him. At first, their touches are gentle. Later it becomes rougher and pulled, pulled, tickled or beaten. Everything in the sense of science? At least there are no robots at work here, even if human emotions are turned upside down for sheer intention. “No,” calls out a performer with a broad grin and everyone involved smiles at the audience.

At the edge the cellist (Angelika Miklin) sits seemingly decoupled and initially without activity. The pendulum clock on the wall ticks for seconds and minutes, the headlights hum and Nic Lloyd calls his three answers into the room. Otherwise dead silence. You could hear the famous pin drop if it weren't for the rumbling stomach of the person next to it. At some point that changes. Miklin quietly picks up her playing on the baroque cello and keeps building up until she seems to be battling with the DJ recording. The performers' bodies twitch to the hard beats robot-like on improvised pedestals. Completely decoupled from being human, they throw their limbs around and hurl their automated bodies across the room. 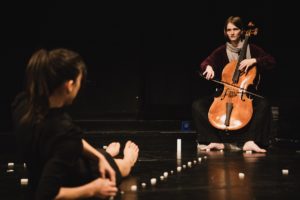 Festival of the senses

The musical arrangement, in correlation with the stage design, ensures exciting sound spaces and impressions. The birds chirp from the tape, the water splashes and creates a jungle mood. On the stage, the stage mist smokes from the pipes, which are suspiciously reminiscent of a tree; Nic Lloyd pulls cotton wool out of his mouth, Elena Francalanci spits Lego bricks, Pascale Staudenbauer strains the hand mist machine and makes Lisa Magnan dance the white result. It is a feast for the senses that creates EMPATHY WITH A RUBBER HAND and breaks all clichés. No object or gesture appears here as what they actually are. That is consistent, after all, the Toihaus Theater celebrates the view of the rubber hand and it evokes a new, foreign and at the same time exciting level. Incidentally, also for the audience, who then explore the real and appearances themselves and clearly have fun with them.