Why create an angle between current and voltage

A coil is supposed to rotate in a constant magnetic field, the stator field. It is also known as an armature or rotor. The coil ends are conductively connected to a collector. These are slip rings with current collectors resting on them, also called carbon brushes. The magnetic field can be provided by a permanent magnet. In large generators, electromagnets operated with direct current generate the magnetic field. The armature coils rotate within the pole pieces of the magnet. In power plants, the generators are driven by water power, gas or steam turbines. With the bicycle dynamo, it is the turning movement of the wheel that drives the armature. The generator principle also works when the magnetic field rotates and the voltage is induced in fixed field (stator) windings.

Whether the generator generates direct or alternating voltage is determined by the structure of the collector. In the DC machine there is a slip ring, which consists of two half rings isolated from each other per coil. The coil ends are each connected with a half ring. This results in a changeover switch, called a commutator, which reverses the polarity of the ends of the coil in relation to the current collector when changing. In the circuit, the current always flows in the same direction and the generator generates a pulsating DC voltage.

In the following video clip the right conductor loop should be viewed. It rotates counterclockwise in the static magnetic field from 0 ° to 180 °. The current flows through it to the front over the upper half of the slip ring. After 180 ° the upper carbon brush, the current collector, is no longer in contact with this slip ring. For the following 180 ° it is now connected to the formerly left conductor loop. The commutator has switched to the other half of the conductor loop, so that the current direction for the upper consumer remains unchanged.

In this generator, an armature winding also rotates in a constant magnetic field. Their ends are connected to their own undivided slip ring in the collector. The conductor loop is no longer switched if it enters the south pole area after leaving the north pole area. The winding supplies a sinusoidal alternating voltage at its ends.

The video clip illustrates the principle of the alternating voltage generator. The rotation takes place for one period in 15 ° steps and then continuously. If the right leg of the conductor loop rotates counterclockwise from 0 ° through 90 ° to 180 °, the current in the upper part of the conductor flows from the back to the front. During this time, the outer ring has the more positive potential. For the following 180 ° it rotates past the south pole, while the other half of the ladder takes the way around the top. The current now flows through this coil section, which rotates from right to left, from back to front to the inner wiper ring, which now receives positive potential. In relation to the pantograph, the direction of the current has been reversed and with constant rotation, the current and voltage follow a sinusoidal curve.

Both types of generator can also be operated as a motor by applying the correct type of voltage to the armature.

The electricity companies provide us with electrical energy in the form of alternating voltage. In the power plant, voltage and current are generated according to the dynamo principle. In simplified terms, the alternating voltage generator consists of three stationary coils, the field windings, offset from one another by 120 °. A DC coil, the magnet armature, rotates in the center of the arrangement. This construction has two advantages. The magnetic field can be regulated and the armature coil's power supply comes from two undivided, thus low-wear slip rings. The AC voltage is picked up directly on the field windings.

From 1882 Nicola Tesla dealt with the generation of alternating voltage. In America in 1887 he built a two-phase alternating current machine, protected by a patent. On this basis, Friedrich August Haselwander built the three-phase generator in Germany in 1887. However, the patent applications he had submitted were not processed in a timely manner and so the use went to the AEG in 1889, where at the same time M. O. Doliwo-Dobrowolski was working on the generation of three-phase alternating current. The technically applicable solutions were available simultaneously in several countries around 1890. In Germany with AEG, in America with N. Tesla, in Switzerland Charles E. L. Brown and in Sweden Jonas Wenström developed practical solutions.

The following video clip shows the principle of the three-phase alternating voltage generator. The amplitude values ​​correspond to our consumer-side mains voltages. The time diagrams of the individual phase voltages can be switched on and off. In the power plants, the generator coil sets are always combined to form a star connection. The three phase voltages L1, L2 and L3, phase-shifted by 120 °, are thus available at the coil ends or outer conductors against the common star point or neutral conductor N. The old conductor designations still valid on the network side are R, S, T. The three-phase network can be operated in two possible circuit types. In the star connection, three independent circuits are possible with one conductor each against the neutral conductor. In the delta connection, the connected load uses the three external conductor voltages at the same time without the neutral conductor.

As can be seen in the video, the generator generates a sinusoidal phase voltage with every set of coils of the same color. This means that three independent consumer groups can be supplied. Three double lines are required to transmit and distribute the energy. With the same load on the three strings, the total current on the return lines has the value zero at all times. The return lines can be combined into one line, the neutral conductor N, at the star point. The result is the concatenation of the strings to form a star connection. 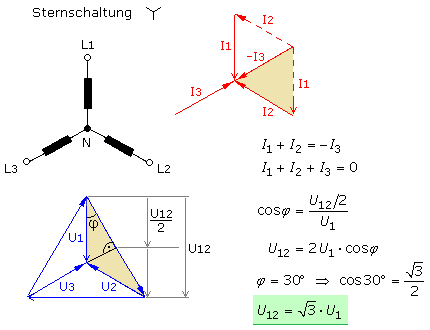 The phase voltages U1 ... U3 form the yellow isosceles triangle with the neighboring voltages of the outer conductors ULL. The height shown divides the line voltage U12 in the middle. The angle φ in the right triangle is 30 °. This results in a concatenation factor of √3 for the conductor voltages among each other compared to the phase voltages L to N.

Three consumer circuits can be switched between two external conductors without including the neutral conductor. This linkage with the circuits between L1-L2, L2-L3 and L3-L1 forms the delta connection of the three-phase system. The video teaching project shows that the useful voltage between two strings is also sinusoidal. It is greater by the concatenation factor √3 than the individual line voltage in the star connection. The power plant generators work in star connection. The power distribution between the substations is done by transformers in a delta connection. The energy distribution network therefore only needs three lines. 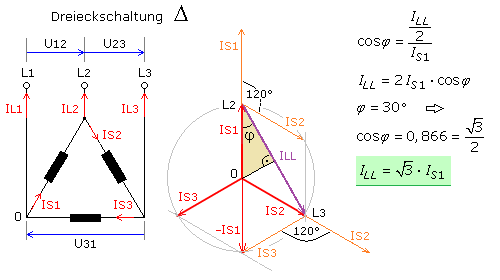 The performance of a three-phase system with symmetrical load is the same for the star and delta connection. It is calculated from the sum of the three line services. For the selected circuit, it can be determined by measuring the conductor voltage and the conductor current.

Another chapter deals with the most important network types. There it is about the connection of the end consumer to the supply network without taking into account any energy transmission networks connected in between.