Here's how to use them correctly - ligatures are not only beautiful, but also functional. Ligatures are very practical and eliminate one or the other typographical evil so that there are no empty spaces or overlaps in various pairs of letters.

The comeback of ligatures

Even back then, ligatures in handwriting and hot type were a special stylistic and practical means of embellishing the typeface. Nowadays ligatures are increasingly used again, but either incorrectly (according to the rules of ligature setting) or only rarely - for fear of breaking the said rules unintentionally.

The word ligature does not have a pair of ligatures itself - because the typical or classic ligatures are: ff, fi, fl, ft or in capitalization AE etc. Ligatures have their origin - as is so often the case - in handwriting and were also transferred from there to hot type. Advantage: In order to optimize the exclusion of the individual lead letters, pairs of characters that were often to be undercut had to be cast together in a pair of 2 or 3. These pairs are called ligatures. There are ligatures for both lower case and upper case. Typical for this are ff, fi, fl, ft or AE etc. Since the lower case ligatures (the lower case ligatures) merged not only materially, but also optically, there is an important rule when using ligatures: No ligature may be placed beyond a syllable boundary. Otherwise, this would be visually impaired as well as when reading.

Depending on the font and style, there are different numbers of ligatures included - in the worst case, none at all. How much ligatures can embellish some typefaces can be seen in the following example:

In addition to the "classic" ligatures, there are also decorative ligatures, which, depending on the font, can contain a large number of ligature variants:

Often ligatures are not used because many do not dare to follow the complex rules of ligature usage. But they're not that complex. The set of ligatures is relatively straightforward, provided you follow a few basic rules that make sense. Of course, there are also more consistent rules, but they deal with special cases, etc.

In the case of compound words, no ligature is placed across the connection. A ligature may be used within the word itself (see example: Shipping). The point of this rule is that the reading flow is not falsified. Because by moving two letters together, the word combination is connected in an unfortunate place and would make reading more difficult.

Between Inflection endings (-te, -ten) and Final syllables (-lein, -lich, -los) and the remaining part of the word no ligatures are set either. Again be at i-beginning suffixes (-ig, -in, -ich, -isch) set a ligature.

Do not trust a typesetting program with automatic ligature setting. InDesign or other typesetting programs are not always smart enough to set ligatures correctly, as the following example shows. Because Purveyor to the court is a compound word and is not set with a ligature. However, InDesign is not aware of this combination of words and automatically sets a ligature. In this case, the designer trusted the program and so the error was already in production. Not so wild: the accident only arose on a 5-meter-wide shop window lettering. 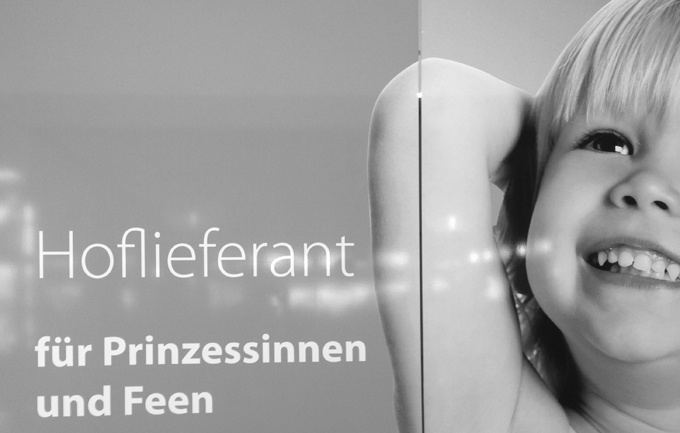 A ligature would look ugly with a heavily blocked sentence - that's why it is made to disappear in this case.

In addition to the ligatures mentioned, there are also ligatures that are no longer recognized as such. Then we would have the eszett or the ampersand symbol (that for et and Et stands). Or percent signs that have been forgotten - standing for the abbreviation cto (abbreviation of the Italian cento - in German: one hundred). The top zero was originally that c, the slash that t and the zero below that O.