What are anti-heroes in comics

Superheroes, antiheroes and the color green

Adventurous creatures with supernatural powers: superheroes, antiheroes and super villains. A personal reportabout a color that has shaped three protagonists of the modern comic scene.

For hours I withdrew to my children's room and leafed through the adventures of my favorite heroes. Put me in their position and with them saved the world. Comics have been with me since I was five. Villains attacked the city. “Heroes of this world, defend the weaker ones!” A cinema experience in the children's room. They helped me to discover my creative streak. They helped me to gain access to the German language very quickly after immigrating to the FRG. Above all, they gave me valuable impulses for a diverse, diverse and multi-layered society. My name is Roham. My name is a heroic name. My first book was a comic book with a heroic protagonist. And they are all part of my story. A story that is accompanied by green.

The name Roham appears for the first time as a hero in the book "Shahname" (German: Book of Kings) by Quasim Ferdosi. The book is one of the most famous works of Persian and world literature. It tells the mythical and to a degree historical past of Persia in the seventh century. As the son of a king and favored even with superhuman powers, "Roham" rides out into the world. His horse is an immortal companion. He accompanies him faithfully by his side, helping the poorer class on all of their adventures: starting with gold that was sometimes stolen. But then later with education to offer them prospects. Some noble houses do not like this, which leads to clashes on and off the battlefield. There are interesting aspects to the figure and its companion that also appear in other hero figures. There we have Robin Hood from the English legend, which Disney depicts dressed in green. But above all Hercules and Pegasus from Greek mythology. My first book: Hercules' first titan fight against the Nemean lion. Hercules is not just an inspiration for me, but for the entire modern comic scene. 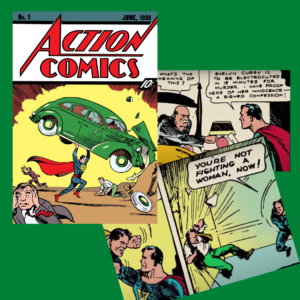 The golden age of comics began in the 1940s - with action comics ahead, starting with the first appearance of Superman. One such action comic edition shaped American pop culture. The first comic book in the issue is now worth over $ 2 million. Even on his first day as a superhero, Superman shows a great performance! He frees a falsely convicted person from death row and hurls a beating husband against the wall. As if that weren't enough, he also forces a corrupt president to resign. 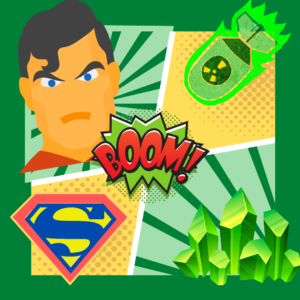 Superman and his weak points: the kryptonite and the atomic bomb

Superman's character is based on Hercules from Greek mythology. He is an alien in human form who was sent to Earth. His role for the people of the earth is an open secret of his comic book authors Jerry Siegel and Joe Schuster. It can be weakened and killed by an extraterrestrial green rock called "kryptonite". Decades later in the comic book "Superman (Volume 2) # 54" there is another weapon that can harm him. In it and in other comic books from the so-called Silver Age, the strongest superhero character encounters the most dangerous man-made weapon of mass destruction: the atomic bomb. The green-illustrated radioactivity was chosen to lead superheroes from the simple golden age to the science-based silver age. I think the use of this weapon should reflect the human compulsion to control through the red switch-off button. In addition, there is the aspect that humans want to demonstrate their human superiority. 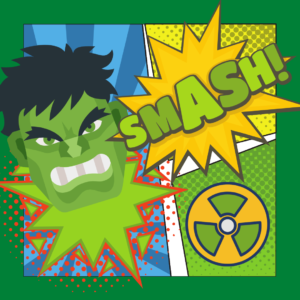 The Golden Age superhero stories were pretty simple. Thematically it was about social injustice, petty crooks and gangsters. Here the superheroes always won and were considered the embodiment of virtue. From a pedagogical point of view, however, the content was not demanding enough. The silver age of comics began with the Hulk in the 1960s. Because of the criticism, it wanted to put the subject of science in the foreground. The green figure Hulk embodies both.

The real name of the Hulk is Bruce Banner. As a gifted physicist and scientist, he lost control of what was happening in an experiment with radioactivity. The released gamma rays, which are illustrated in green to this day, turned him into a green aggressive monster and an antihero. Projecting 'failure' onto the green screen of science was also a pioneering idea of ​​the silver age of comics. The protagonists of the Silver Age were either scientists themselves or became heroes, anti-heroes or villains through science. That makes the green figure Hulk indispensable for the comic community and for me. Hulk's biography became the model for many fascinating superheroes. Among them is my ultimate favorite superhero who has shaped my story the most: Spiderman. 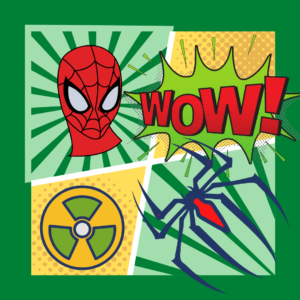 As a child, the boy Peter Parker lost both parents and therefore grew up with his aunt and uncle. You are a little older and sweeten his story with wisdom: "Great power leads to great responsibility". His uncle gives him this wisdom on his way to the threshold of coming of age. It is his last wisdom. On the same day the uncle is shot dead by an armed robber. Somehow it was his last for me and my life.

During an excursion, a radioactive spider bred in a laboratory bites the boy and initiates a deadly poison for him. He can save himself from this predicament with willpower alone. From then on, he will become the superhero that so many love today. The most fascinating thing for me is that Peter Parker developed his greatest strength from his weakest moment. Some superheroes are born with superpowers - like Superman. Others don't ... That's what makes them so complex and interesting to me.

Spidey (Spiderman's nickname) was not only the 'victim' of a radioactive spider genetically modified by scientists. He is studying physics at a university. I remember, as if it had only been yesterday, how fascinated I was with him in the large illustrated lecture halls. When I later visited the Stuttgart Student Engineering Academy for the first time, my thoughts were with Spidey. And when I entered a lecture hall for the first time, it was a very special moment for me.

The theming of science in the comics

From the Silver Age onwards, radioactivity and gamma rays are constantly thematized and illustrated in comics. The main reason for this is the paranoia of the cold war, according to the former president of the comic book publisher DC Comics, Janette Kahn. A nuclear war could have broken out at any time. Stan Lee also spoke to the Franco-German cultural broadcaster Arte about the green-illustrated radiations. The legendary comic book author and creator of the Hulk and Spiderman thinks they look cooler in green. He can't see or recognize gamma radiation, but if it looks cool, he uses it in his comics. So that the gamma rays are green is fictional. According to Stan Lee and Kahn, radioactivity and gamma rays are used because they cause discomfort and tension.

The media scientist Professor Susanne Marschall finds clear words for it in an interview with Tim Richter. The natural green is basically predestined for landscape images. The moving image expert adds: “We are irritated when someone is green. We think of poison and danger. ”Historically, this is related to our ancestors. The color green was an indication of which food could be edible or poisonous. 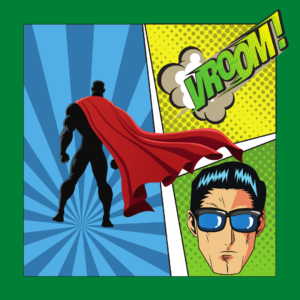 My head cinema: stepping out into the world as a superhero. And VROOM.

Colors are perceived differently. Every color is a source of information. Seen in this way, colors can be used as a means of communication - like numbers or letters. It gives images more information and enables readers to better follow the context. Not least because of this, colors play a very important role in comics. Of course, characters also get their recognition feature through them. Adventurous creatures with supernatural powers: superheroes, antiheroes and super villains. That was a report on the color green, which has shaped three protagonists of the modern comic scene. So it's no wonder that I still leaf through Comis nostalgically today ...

You probably also have superheroes, heroes or people from your environment who have given you interesting thought impulses. Feel free to tell me about it in the comments.