How are solar cells doped

Undoped semiconductor material such as silicon has no free charge carriers. The incorporation of a very low concentration (doping) of pentavalent atoms (such as arsenic) in tetravalent silicon material results in a low concentration of electrons in the conductivity band. The incorporation of trivalent atoms (such as aluminum) results in electron defects (holes) in the valence band. The former material is negatively conductive (n-type), the latter is positively conductive (p-type). The mobile charges are compensated in the doped material by fixed positive or negative charges. 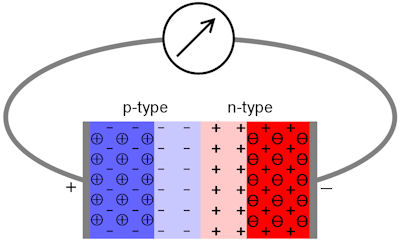 A semiconductor diode is created by stringing together metallic contacts, n-type semiconductors, p-type semiconductors and metallic contacts. In the boundary layer (p-n-junction) between the n- and p-conducting material, the mobile charge carriers (shown in circles in the figure) cancel each other out, while the stationary charges (negative in the p-conducting and positive in the n-conducting material) are retained. They create a potential barrier in the carrier-depleted boundary layer, which prevents further moving charge carriers from flowing in and limits the thickness of the boundary layer to less than 1 µm.

A solar cell is so thin that sunlight penetrates to the boundary layer. There the light energy is converted into a movable electron and a movable hole by the internal photo effect. Some of the electrons manage to penetrate the boundary layer into the n-conductive area and some holes manage to get into the p-conductive area. Unfortunately, the majority of the charge carrier pairs recombine in the boundary layer and thereby limit the efficiency of solar cells to less than 25%. However, if the charge carriers have come out of the boundary layer, the potential barrier prevents them from returning. If the coatings of the n- and p-conductive layer are connected by a wire, these charge carriers only combine "backwards" via the power consumer, since the resistance of the layer, the wire and even a consumer is lower than that of the boundary layer. The voltage generated by a single solar cell is around one volt. A series connection of the cells results in a higher system voltage, which is currently limited to 1 kV for safety reasons. Inverters are used for the conversion into alternating current and the generation of higher voltages.

The Waldpolenz energy park is the largest PV system at the time, which was built between 2007 and 2011 on an area of ​​220 hectares of a former airfield near Leipzig, consists of 700,000 modules, has an electrical output of 52 MW and delivers 52 GWh of electricity per year. The PV system was built from CdTe thin-film modules. These are II-VI semiconductors that are used in addition to III-V semiconductors (GaAs) and, above all, tetravalent semiconductors such as Si or Ge. The Roman numerals II, III, V and VI denote the value of one component of the material. In the Cd-Te combination, the modules can be manufactured economically on a large scale. Higher efficiencies are achieved with GaAs cells. With thicker layers, Si materials are divided into monocrystalline (higher efficiency) and polycrystalline (better price-performance ratio). 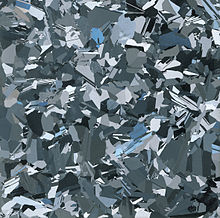 The picture on the right shows a polycrystalline wafer with an edge length of 10 cm. The Si wafer known as the "thick layer" is 250 µm thick. Thin-film cells made of crystalline or polycrystalline material have a thickness of the order of 10 µm. The CIGS solar cell is based on copper, indium, gallium and diselenide and consists of a polycrystalline 1-2 µm thick layer. The maximum laboratory efficiency value of 21.7% was achieved in 2014, while technically manufactured modules are 17.4% and have a small market share due to the high costs of indium.

Solar cells made from organic semiconductors are considered to be even cheaper and easier to manufacture. So far, however, only low efficiencies and durability have been achieved with polymers. No material bottlenecks are to be expected for polymers and silicon. It will be more difficult in the future with the availability of indium, gallium, tellurium and selenium. Current developments in the field of solar cells
can be followed on the English and German pages of Wikipedia.

The installed capacities of new photovoltaic ground-mounted systems have developed even more than the performance of the solar cells. When the solar park in Neuhardenberg went into operation in 2012, the system was still leading in Europe with an output of 155 MW. Since 2020 there have been three systems in China and India with a capacity of more than 2 GW, see list of the world's largest solar parks. In 2015, China even overtook Germany in terms of annual reinstallation per capita. At the end of 2019, around 500 GW of nominal power was installed in PV systems worldwide, 49 GW of which in Germany, see Wikipedia The systems covered around 8% of the electricity demand in Germany and around 2% in the world.

Several criteria are used to assess the possible uses of PV systems. The assessment of the economic amortization is made more difficult by the fact that it is not possible to make precise predictions about government subsidies for PV electricity generation and the development of electricity prices. A more precisely measurable parameter is the energetic amortization time. This is the number of years in which the PV system generates the energy in kilowatt hours that was used to manufacture the system. Thin-film modules can pay for themselves after around 2-3 years. Systems with polycrystalline cells need 3-5 years and those with monocrystalline cells 4-6 years. To do this, the sun has to shine abundantly. In Berlin, double the times are to be expected. Only when the calculated times exceed the estimated service life of around 20 years does the balance become negative.

Many novelties and details of photovoltaics can be found on the solar server.