How is Sirius the hottest sun

In the winter months Sirius dominates the main star in the constellation Great Dog in the southern sky. With an apparent magnitude of -1.46 mag, Sirius is the brightest fixed star in the entire sky. It is only surpassed in brightness by the planets. 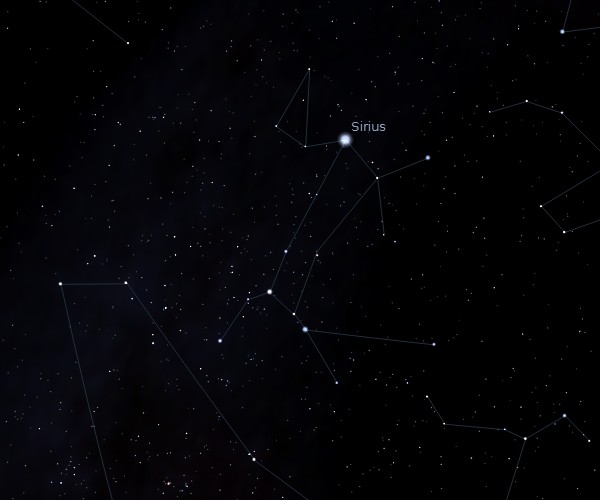 The great dog constellation with the bright star Sirius
Map made with Stellarium
© M. Lehwald

In late winter and spring, Sirius is the first star to be seen at dusk. With a precisely adjusted and permanently mounted telescope, it can even be adjusted in the daytime sky according to partial circles. 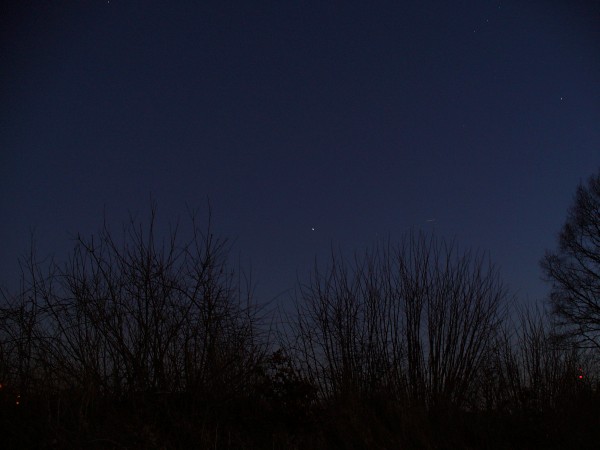 Sirius is so bright because he is really close to us at first. Only 8.6 light years separate us from Sirius. This makes it one of the closest stars in the vicinity of the sun.

Sirius shines in a bluish light and has the spectral class A1. This makes it significantly hotter than the sun, because the temperature on its surface is 9,900 Kelvin. In total, Sirius shines 25 times brighter than our sun. If it were at a distance of 10 parsecs or 32.6 light years, it would still have a magnitude of 1.4 mag. 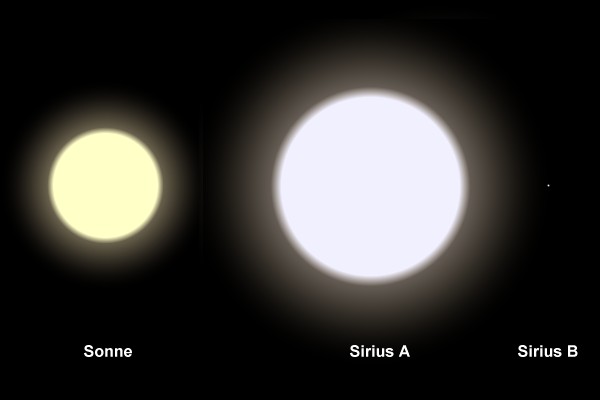 Size comparison of Sirius A and B with the sun
© M. Lehwald

Sirius is a main sequence star and fuses hydrogen to helium. Sirius is still a very young star, around 240 million years old. The diameter of Sirius is 1.7 times that of the sun. Sirius has about twice the mass of the sun. It will use up its hydrogen supply much faster than the sun. After about 1 billion years, the hydrogen will be converted to helium and Sirius will expand into a red giant.

The companion Sirius B

The German astronomer Friedrich Bessel noticed in 1844 that Sirius did not show a straight, but a snake-shaped movement in the sky. Something seems to be staggering Sirius. From this, Bessel deduced a companion star that should orbit Sirius in about 50 years. However, nobody found it in the telescope at the time.

In 1862, Alvan Graham Clark tested an objective lens with a diameter of 47 centimeters on Sirius. He saw a faint companion star close to Sirius, which was the presumed Sirius companion.

The Sirius companion is referred to as Sirius B and the main star as Sirius A. Sirius B is located about 5 arc seconds from Sirius A, which can be separated well by a small telescope. However, Sirius B has an apparent brightness of only 8.6 mag, which means that the brightness difference between it and Sirius A is more than 10 size classes! Therefore, Sirius B can only be seen in large telescopes, because it is simply completely outshone by Sirius A. 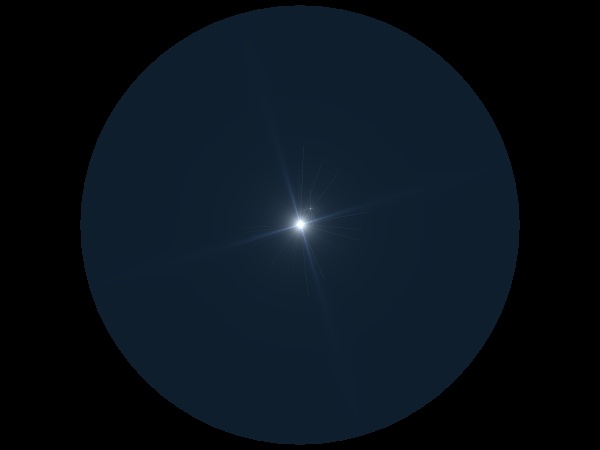 The reason for this is that Sirius B is tiny. It is only barely the size of the earth! Sirius B is a white dwarf. It is the end product of a star that was about five times more massive than the Sun, making it more massive than Sirius A. The more mass a star has, the more wasteful it is with its hydrogen supply. Sirius B expanded into a red giant 100 million years after its creation. Its outer layers were blown off as a star wind, and what remained was the inner core - a white dwarf.

The two stars Sirius A and B will orbit each other in about 50 years, as Friedrich Bessel had already predicted. In reality, Sirius B does not orbit Sirius A, but rather both stars orbit a common center of gravity.

In 1994, Sirius A and B had the closest approach on their orbits, also known as the periastron. At this point in time, the two stars were 8 astronomical units apart, that is 1.2 billion kilometers. Apastron will be reached in 2025, when the two stars will reach their greatest distance from each other at 31 astronomical units or 4.7 billion kilometers. Seen from Earth, the distance between Sirius A and B varies between 3.1 and 11.9 arc seconds.