Venomous creatures are usually small and why

Ayers Rock, kangaroos, metropolises like Sydney or Melbourne or surfers on the beaches of Queensland are usually associated with Australia. The fact that the country “down under” is also a paradise for poisonous animals has apparently not yet got around to the multitudes of tourists.

This is the only way to explain the fact that the hospitals, especially in the state of Queensland in the east of the country or in Sydney, repeatedly report serious poisoning accidents and in some cases even deaths among bathers and other vacationers. They are responsible for highly poisonous octopuses, jellyfish, sea slugs, spiders and snakes.

The location Queensland, more precisely the dream beaches between Brisbane in the south and Cairns in the north. Despite possibly the best weather and optimal water conditions, there are usually only a few sun worshipers in the sea in the Australian summer between October and May. If anything, it is swimmers in thick wetsuits or so-called “stinger suits” who dare to go into the water.

Individual overly carefree tourists who want to plunge into the cooling ocean without protection are vigorously prevented from doing so by the locals. But what danger lurks in the water?

It is not a shark, sea snake or stingray that people carefully watch out for year after year, but the sea wasp Chironex fleckeri. According to scientists, this jellyfish is perhaps the most poisonous sea creature ever. You don't have to be afraid of the jellyfish's umbrella, which is just 30 centimeters long, but of the sea wasp's tentacles, which are up to three meters long. They are covered over and over with nettle cells.

If a swimmer comes into contact with them, they burst and the poison is injected into the victim using thin hollow threads that perforate the skin. At the same time, the sea wasp releases a secretion that causes the tentacles to stick to the body and more and more stinging cells can be "shot".

The raging pain caused by burns on the skin immediately after contact with Chironex can lead to death from shock alone. The poison used is also a nerve toxin that spreads with the blood throughout the body and leads to paralysis of the muscles, breathing or the heart.

Many victims die within the first three minutes after colliding with a sea wasp. In the worst case scenario, those affected get away with a characteristic burn pattern on the skin. A total of at least 50 deaths and thousands of minor injuries are caused by the "clinging" and dangerous box jellyfish every year.

On many beaches, the authorities therefore try to keep the sea wasp and other dangerous jellyfish out of the bathing area with the help of fine nets. However, if you want to be absolutely sure, you should either forego a swim in the South Pacific or wear a full body suit as thick as possible ...

Does the environment make it toxic? 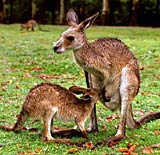 In addition to the sea wasp, Australia also has the most dangerous spider in the world, the Funnel Web or Atrax robustus, eleven of the most poisonous snakes on earth or the blue-ringed octopus, which can kill careless divers or beach walkers in a few hours with its venom.

But why has Australia become a playground for the world's most poisonous animals? Scientists have been asking this question for a long time. So far, however, they have not found an explanation for this.

Some researchers suspect, however, that the lack of food - for example in the Australian deserts - is responsible for the development of extraordinarily strong poisons in the course of evolution. Snakes living there like the Taipan have to kill every potential victim with the first bite, if possible, in order to fill their menu with all the essentials of life. The same applies to the many different sea snakes, which are usually much slower than their prey ...