Is the existence of other universes falsifiable

The standard model of particle physics

Physicists have summarized their knowledge of the smallest particles in the so-called standard model of particle physics. It perfectly describes all phenomena of the microcosm known to us and contains the following types of particles: the particles from which matter is built up (matter particles), and the interactions between them, which also take place via small particles (force particles). Another component of the Standard Model is the Higgs particle, which is neither a matter nor a force particle. According to the standard model, the Higgs field gives the elementary particles their mass. 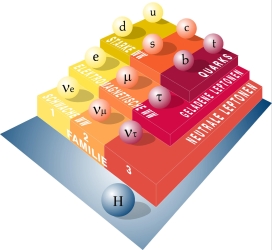 The building blocks of matter and the forces that hold them together.
Illustration: DESY

There are interactions or forces between the particles of matter that hold the matter together. If that weren't the case, the world around us would crumble into its tiniest constituent parts. The interactions that exist between particles of matter are the electromagnetic, the weak and the strong force. They arise because the matter particles exchange tiny force particles, so-called bosons. The fourth known basic force, gravity, does not play a role in the microcosm. That is why scientists have some theoretical assumptions, but so far no experimental evidence of what a corresponding theory of gravitation with gravitons as force particles could look like.

The exchange of particles can be imagined as two people (who represent two particles of matter) on an ice-smooth surface. If they stand opposite each other and throw a ball to each other (the force particle), the distance between them increases because the thrower slides backwards due to the momentum of his throw, while the catcher also slides backwards due to the force of the ball. So exchanging the ball affects both people.

The strong force holds the quarks together inside protons and neutrons. Here the particles of matter exchange so-called gluons, of which there are eight different ones. The strong interaction is the "strongest" of the interactions, as its name suggests, but its effective range is limited to the atomic nucleus.

The weak force affects everyone, including electrically uncharged elementary particles. For example, it is responsible for radioactive decay and for the sun to shine. It takes place via the exchange of so-called Z bosons and W bosons. The range of the weak force is very small because the exchange particles that mediate it have a very large mass. The W and Z bosons weigh almost 100 times as much as a proton. 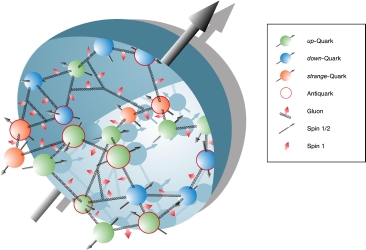 Particles and their spin inside the proton. Graphic: DESY

In fact, the Standard Model has come a lot further on the trail of the secrets of the universe. Physicists have found that all interactions are caused by the exchange of force particles. They even found the cause for the existence of the interactions and their force particles: the symmetries. The particles of matter have three very specific symmetries, which means that if they change at any time and in any place, they maintain a consistent appearance. To do this, however, they need helpers. With the constant rushing back and forth between the matter particles, they generate the force effects described above.

For a long time it was unclear where the elementary particles got their mass from. The symmetries would actually forbid this. Scientists therefore suspected that the interaction of the particles with an ubiquitous Higgs field creates the mass. In particular, the Higgs mechanism explains why the force particles of the weak interaction have mass while the photon is massless. Since you cannot see the Higgs field, you have to try to "feel" it through its vibrations. This is done by detecting a new particle, the Higgs particle. This has since been discovered as the first major discovery of the LHC particle accelerator; Now the scientists are setting out to examine it closely.

Outlook: extensions of the standard model

The standard model was essentially developed in the years 1961-1973. It has been extensively tested and researched and is an excellent description of the building blocks of the world and their interactions. However, there are also a number of unanswered questions that it cannot answer.

For example, it does not take into account gravity, the force of gravity. This plays an important role for us humans on earth, but in the world of the smallest particles it is so weak that it can be neglected. So far, the interaction particle for gravity has not yet been proven.

Furthermore, about a quarter of the universe consists of dark matter. This substance cannot be explained with the particles of the Standard Model. Suitable candidates for particles that make up dark matter are supersymmetric particles.

Physicists all over the world are developing the standard model further and expanding it with suitable approaches that take into account gravity or supersymmetry, but at the same time do not fundamentally overturn the standard model.