What are some practical uses of holograms

Researchers have now achieved a real breakthrough: For the first time, they have developed a technology that can generate and play holographic 3D videos in real time. The system now presented in “Nature” uses pulsed laser beams to create a three-dimensional moving image in a special polymer that can be seen without 3D glasses or other additional devices. 3D teleconferences or three-dimensional navigation maps are now within reach.

The technology has been around in Hollywood since the “Star Wars” films of the 1970s: the protagonist Luke Skywalker learns of the plight of Princess Leia through a holographic video played by the R2D2 robot. Since then, there have also been numerous attempts to capture three-dimensional images on film in reality. However, all attempts to create moving holograms that can be perceived spatially without 3D glasses failed - mainly due to a lack of large, quickly upgradeable holographic recording media.

But now a team of researchers led by Nasser Peyghambarian, Professor of Optics at the University of Arizona, has made a real breakthrough in this area: They have developed a holographic 3D medium that enables the projection of a moving, three-dimensional image. It is visible without additional devices such as 3D glasses or the like. For the prototype now being presented - still the size of a 10-inch screen - a picture is taken with the help of several normal cameras; the more recordings from different angles, the better.

"Holographic telepresence means that we can take a three-dimensional image in one place and show it in another place, in real time and anywhere in the world," explains Peyghambarian. "Holographic stereography can already reproduce large-format static 3D images in high resolution and depth, but so far it has lacked the dynamics and update capacity."

The information from the cameras is then transmitted in a rapidly pulsing laser beam that is connected to a reference laser. The interference pattern resulting from this connection is written in a photorefractive polymer, which forms the core of the new development: "At the heart of the system is a screen made of a new type of photorefractive material that can create holograms that are renewed every two seconds," explains Pierre -Alexandre Blanche, lead author of the "Nature" publication. "For the first time, this gives the system a speed that can be described as quasi real-time." 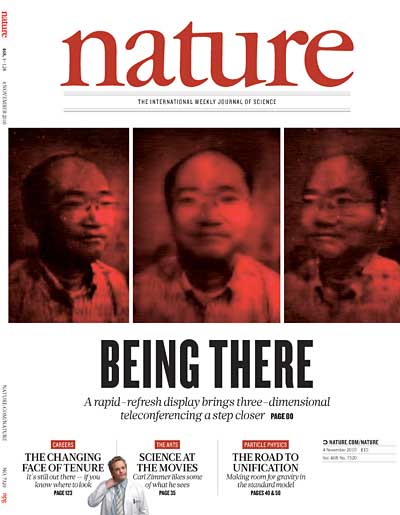 Nature cover on the topic © Nature

Under the influence of a laser, the polymer generates the holographic 3D image and saves it. Each laser pulse generates a three-dimensional, holographic pixel. Depending on the test conditions, the image fades by itself after a few seconds or minutes or it can be replaced by a new 3D image generated by a laser pulse. The fast frame rate and relatively low demands on computer performance and storage space are major advances compared to previous approaches, which were mostly far too slow to be suitable for practical applications.

"For example, if I want to give a presentation in New York, all I need is a set of cameras here in my Tucson office and a fast internet connection," explains Peyghambarian. At the other end, in New York, is a display in which our laser system is integrated. Everything is completely automated and computer controlled. When the image signals are transmitted, the lasers write them on the screen and transform them into a three-dimensional image of my speaking self. "

Another novelty of the 3D holo film: The resulting images actually show different viewing angles as so-called full parallax: “If you move your head to the left, right, up or down, you see different perspectives. That creates a very lifelike image, ”says Blanche. So far, the system can only display images in one color, but the researchers have already demonstrated the first multicolored 3D displays that come close to that of television in terms of refresh rate.

The scientists see applications for their holographic 3D videos primarily in telepresence applications, advertising, updateable three-dimensional maps, for example for navigation, and in entertainment. But they can also envision a use in telemedicine: "Surgeons at different locations around the world can watch operations in 3D and real time and intervene in an advisory capacity," says Peyghambarian.