How big is K Pop worldwide

K-pop
"Just be a free spirit"

The colorful, stylish bands with their choreographies reach millions of users on social media. The wave of fascination with K-Pop has long spilled over from Asia to Europe. What is it about the South Korean phenomenon that it captivates people all over the world?

In 2017 Rodo visited Vietnam, where part of his family lives. His cousins ​​at home ran non-stop television programs with dance groups - colorful, stylish and dynamic. However, the songs were not in Vietnamese. “What is that?” He asked a cousin, who was also surprised when he asked: “This is K-Pop. Do not you know that?"

Today, the now 16-year-old student from the Dresden area not only listens to South Korean pop music (K-Pop stands for Korean Popular Music), but also lives the trend. With his group Ukiyo he dances the complex choreographies of the K-pop bands in front of the camera. The group consists of five Vietnamese-German young people from the region - PJ (16), Vy (17), Tina (17), Duy (17) and Rodo - who got to know each other through dancing in youth groups or at school. Everyone shares a passion for K-Pop. The fascinating music videos are one thing, the wide range of music and choreographies are another. "K-pop choreos are very diverse and this allows me to improve my dance skills," says Duy, who also dances in a hip-hop crew. 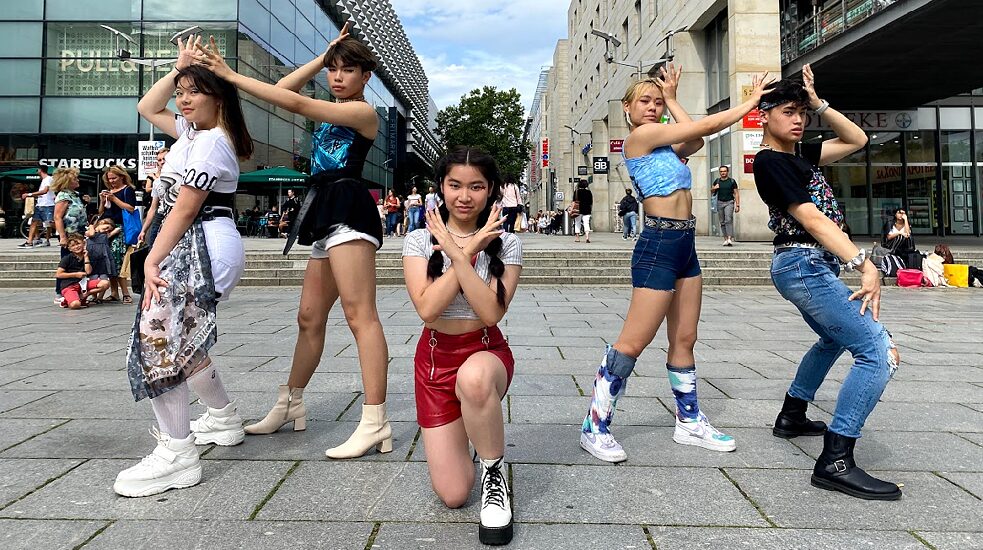 The cover dance group Ukiyo from the Dresden area shows a choreography formation from the song “Not Shy” by the K-Pop girl group ITZY. | Photo (detail): © Ukiyo OfficialUkiyo has so far "covered" three K-Pop dances for the Dresden public, that is, meticulously rehearsed, danced on the street, recorded the performance and published the video online. For songs such asLovesick Girlsfrom Blackpink orNot shy from ITZY they prepare for several weeks: First everyone teaches themselves the dance routine using the instruction videos on YouTube and then they practice together for three to four days to perfect the formation changes and synchronization. They also try to embody their idols through fashion. “Sometimes we tailor the clothes we buy ourselves,” explains Vy. Then they take to the streets - regardless of whether it is raining or a heat wave has reached the city. They then upload the recording to YouTube.

The street as a backdrop

If you search for “K-Pop Dance Cover” you can find countless videos of groups like Ukiyo who seem to be dancing to K-Pop in all parts of the world - in Paris, Hanoi, Perth, Tokyo or Moscow. The public, mostly shopping streets with a lot of traffic, becomes the backdrop for their appearances. They love it when the pedestrians watch their dances with their mouths open or speak to them. “There were people who even wanted to take photos with us,” says Tina. The videos of such public appearances are an integral part of the K-Pop fan culture worldwide, which produces its own stars: Some groups reach tens of millions of clicks.

The trend is particularly popular with teenagers and teenagers, but Michelle, a civil servant in her thirties, has also been listening to K-pop since 2016. “I used to have prejudices against pop music myself. That it is thoroughly industrialized and musically less demanding, and therefore less valuable. ”However, through the South Korean boy group VIXX, she learned to appreciate the different qualities. An experience that not only changed your listening behavior, but also your everyday life. “I cooked Korean food for New Year's Eve. My husband and I also traveled to South Korea - none of this would have crossed our minds until I heard K-pop. It's a liberating activity that can get you really emotional. "

The Berlin theater maker Frederika Tsai publicly acknowledges her love for K-Pop. She finds the lyrics of BTS particularly noteworthy: “InBlack Swan BTS addresses the inner struggle as an artist, and especially in the pandemic I can find myself in it. ”In her work context, the musicologist with a doctorate listens to classical or experimental electronic music, but that is no reason to devalue K-Pop as music. "K-Pop may not be the most complex musically, but you can find a good mix of different genres such as hip-hop, jazz and R&B in it."

With sold out concerts and as cover motifs for the youth magazine BRAVO, the K-Pop stars are already enjoying a strong public presence among German youth. The members of Ukiyo say that K-pop is also a way to discover yourself. “I get to know my weaknesses and strengths as a dancer through dance covers,” says PJ. “I was afraid of other people and wanted to adapt,” says Rodo. “Not today - I wear what I want to wear. I just want to be a free spirit. And people like our group because we are authentic. "