Does the Higgs mechanism mean an ether 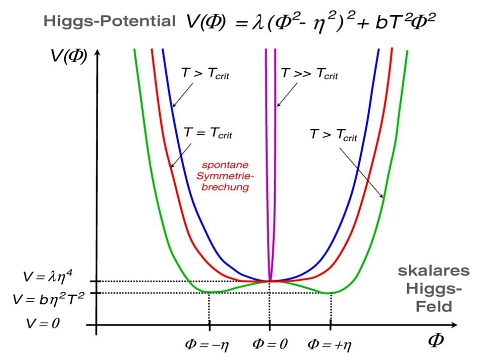 The figure above (large version) illustrates the potential curve for a real Higgs potential, parameterized by the temperature. The vacuum conditions depend on a critical temperature at which the Symmetry breaking takes place (red curve). Above this temperature there is one higher symmetry: there is only one global minimum, namely where the field disappears (blue and purple curves). Below the critical temperature, however, this symmetry is broken: the global minimum becomes the local maximum and two new global minima appear on the left and right of it (green curve). A curve discussion (analysis of a variable) supplies the parameterized coordinates

the extrema and inflection points and the equation for the critical temperature (see equation on the left). The figure also shows that the vacuum expectation value of the Higgs field (Moduli), which is currently associated with the potential well, decreases according to the symmetry calculation. Because the field will use every fluctuation in order to 'slide off' the potential mountain (unstable equilibrium position) and slide into one of the two minima, which are stable states. This is a wonderful analogy to equilibrium positions in classical mechanics!

The complex expansion of this potential can be generated simply by rotating the function around the y-axis (ordinate). The corresponding potential surface has the shape of a Mexican sombrero hat, which is why the English name Mexican has potential is common for the complex Higgs potential. The two vacuum states below the critical temperature then degenerate. They say: the Vacuum manifold (Moduli space, engl. Moduli space) is a circle. In a three-dimensional coordinate system, the base area is spanned by the real and imaginary parts of the field. The vacuum conditions on the circle can be controlled by a Phase angle be parameterized. The rotational symmetry for complex-valued Higgs fields is called U (1) symmetry, according to group theory.

These mathematical properties of the real Higgs potential are interpreted cosmologically as follows: Shortly after the Big Bang, very high temperatures above the GUT scale of 10 prevailed29 K. The Higgs field assumed the value zero in the entire space because the symmetry had not yet been broken (corresponding to a global minimum). Due to the expansion of the hot fireball, it slowly cooled down, the temperature sank and approached the critical GUT temperature. Then the phase transition began: the symmetry was broken spontaneously. The real Higgs field now has two possible vacuum expectation values, the complex one even more, which differ by a phase angle. The 'spontaneous' thing about breaking the symmetry is that it is not clear a priori which of the two vacuum values ​​the real Higgs field will assume. This is subject to a statistical distribution. The 'jumping' of the vacuum expectation value of the Higgs field from zero to a finite value is what drives the inflation an exponential expansion of the universe. Because this expansion can be faster than light can areas that are causally decoupled from one another arise that have different expected values ​​for the vacuum.

The wrong rabbit of nothing

The problem is that the Higgs field is a continuously differentiable function, so it must not have any discontinuities in the form of 'jumps'. Between two different expectation values ​​there must therefore be areas that have vanishing Higgs fields, but (in contrast to the global minimum above the critical temperature) finite Higgs potential. These areas are called wrong vacuum. The finite expectation for the vacuum implies locally a finite energythat is included. Physicists also name them domain walls, which are an example of topological defects. They separate different vacuums from one another in three dimensions. Their field course corresponds mathematically to the hyperbolic tangent, which is illustrated in the next figure: 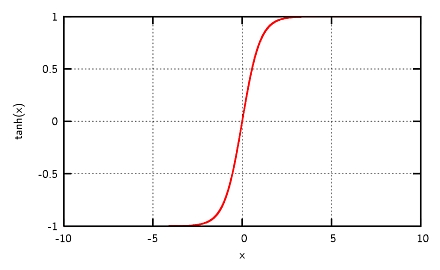 The two different levels on the left and right correspond to the different vacuums between them domain walls convey. Unfortunately, the astronomers observed this domain walls not yet.

In the course of this, this was done complex Higgs field a (which can be thought of as composed of two real Higgs fields, real and imaginary part). Topological defects also occur in this extension: the cosmic strings (the Not to be confused with the strings of string theories!). They have a different topology than domain walls and also consist of inclusions of the false Higgs vacuum. Mathematically speaking, the cosmic strings are one-dimensional vertex lines. In its cores the Higgs field disappears, but since the structures are extended (either closed or infinitely long) one can imagine that they have stored a not inconsiderable part of field energy. Also, because the theorists assume that the strings oscillate, so must they Gravitational waves send out. That makes this scenario interesting again for astronomers, namely for the gravitational wave detectors that have been powerfully advanced in recent years.