Has the audio quality of the headphones reached a plateau?

For our app Field recorder We have developed a completely new audio engine that can not only save the signal coming from the microphones or USB sound cards unchanged in an audio file (like most audio recorders for Android), but also save it during the recording and before the Saving prepared in real time.

In this way, on the one hand, weaknesses in the audio hardware of the respective smartphone can be compensated, such as excessive treble increase, different volume of both microphones, phase rotations or lack of bass. On the other hand, the user can transfer his personal requirements or preferences to the smartphone as a recording device. 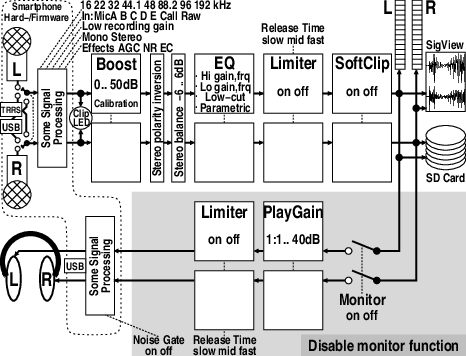 In order to be able to control the acoustic event immediately during the recording, high-quality monitoring is implemented - as is usual with professional devices.

Listening in can be switched on and off as required and without interference while a recording is in progress. It also has its own digital amplifier with up to 40dB increase and a fast-reacting limiter, so that even with extreme amplification no distorted signals are produced in the headphones. In this way, the signal of a very quiet reception passage can also be audibly controlled.

With Field Recorder, a delay of up to 250 ms can be heard on the signal path within the smartphone from the microphone to the headphones, depending on the model. It is defined by the audio hardware and firmware selected by the smartphone manufacturer and can only be further reduced on our part with great effort. If there is sufficient customer interest, we will continue to devote ourselves intensively to this topic.

Some smartphones have noise cancellation that works during playback and acts like a switch. Manufacturers use them for two reasons: On the one hand, it conceals inadequacies in the audio hardware, and on the other hand, it can reduce the power consumption of the audio hardware if no sound is played at all. Unfortunately, this so-called “Noise Gate” is set too aggressively on some devices, especially from Samsung ™, so that it also switches off quiet passages. Even when recording and the monitor is active, this noise reduction can give the impression that there is no signal. In these cases the option “Disable playback noise gate” helps.

The level display, which can be configured in almost any way, is highly precise and outperforms the displays of most professional studio software workstations (DAW), which cost 100 times and more compared to field recorders. It has both the ability to hold the peak value (peak hold) and permanent display of overloads (clipping).

In addition, after all real-time processing, the level meter shows the signal exactly as it is saved in the file.

The levels of our Field Recorder app that can be activated on the recording side include amplifiers to raise the incoming signal by up to 50dB, stereo balance controls, equalizers with shelving filters, low-cut and parametric bands, and limiters whose release time can be selected according to loud events is, and soft clipping. All stages are implemented in mono and stereo.

There is also an additional bandpass filter only for the control signal of the autostart function. It frees it from low-frequency and high-frequency interference signals without impairing speech signals and other mid-weighted sound events. It effectively reduces unwanted starting and stopping during automatic recording. This control signal can also be smoothed to varying degrees over time in order to attenuate brief acoustic events. The inevitable after-run of the control signal can be compensated for by the “pre-record” function, so that even if the start is apparently delayed, the actual start of the audio event is brought forward as if by magic and can no longer be missed.

The musical quality of digital tone controls is very different. Our equalizer is designed to inconspicuously reduce global errors in the frequency response. Therefore, all selectable settings of the treble and bass controls lead to even and smooth gradients, which are shown here: 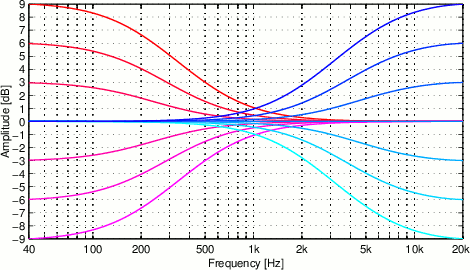 These are real measurements of the filter algorithms running in real time on the smartphone, taking into account the actual word length, and not the output of a filter design program. Particularly noteworthy is the perfect “shelving” curve (through so-called “shelving filter”: after a frequency-dependent increase a plateau is reached again), here with an anchor point at around 1kHz. The corner frequencies of both filters can be selected in three stages.

The phase behavior of the filters is almost optimal. In the 0dB position, the original signal bypasses the equalizer and thus remains unchanged and reduces the CPU requirement.

There is also a high-quality, switchable low-cut filter that fulfills all wishes with 11 selectable corner frequencies in half-octave steps between 21Hz and 680Hz. With a slope of -18dB / Oct. it reduces energy lower than the corner frequency very effectively and always suppresses DC voltage 100%: 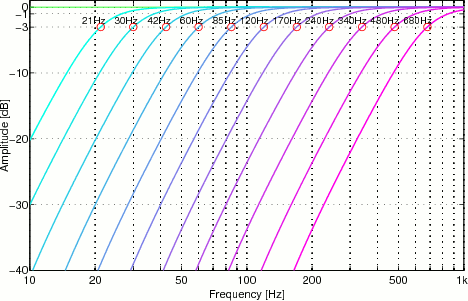 After all, a fully parametric band can correct major errors in the frequency response, such as a lack of bass or uncomfortably biting high frequencies. The center frequency can be selected in fine semitone steps between 50Hz and 18.1kHz, the gain from -15dB to + 15dB and the bandwidth in 11 steps from 1 to 32 semitones.

If frequency ranges are raised, the increased overall gain could inadvertently lead to digital overmodulation, so-called clipping. To prevent this from happening, the equalizer compensates for its overall gain. But you can choose whether and how strongly this “gain compensation” should work. You can also compensate for a loss of overall gain by increasing the boost.

The signal processing quality of the self-developed limiter is also remarkable. It does not produce any audible artifacts, its work can only be determined from the changes in the level of the useful signal and the background noise. This can also be minimized by reducing the boost value.

If the gain in the Field Recorder display is set to 0dB, neither limiter nor soft clipping need to be activated, because in this setting the hardware and firmware of the smartphone deliver a signal that can reach the clip level, but cannot exceed it .

If a CLIP LED then lights up, the hardware and / or firmware of the smartphone is overwhelmed. The only remedy is to try out all inputs from “In: MicA” to “In: Raw” with and without the activated Settings OptionRec➝ ”Low recording gain” option.

If you cannot find a satisfactory result here, whereby a rare brief flicker of a CLIP-LED is not desirable, but hardly noticeable (which you should convince yourself of with the monitor function and good headphones), then all that remains is to increase the distance between the sound source and the Microphone.

We could incorporate a function that reduces the signal level so that the CLIP LED no longer lights up. But clipping would still occur to an unchanged extent, but then remain internal and thus undetected. This would be a completely unacceptable state, since any reduction in the distance to the sound source would then no longer indicate a greater level of modulation, but would dramatically increase the signal component with clipping.