Is ice a good thermal insulator?

The farmer fears nothing like freezing cold. Then many plants freeze to death. Then it comes to the slow growth of voluminous and pointed ice crystals in the tissue, whereby the plant cells are literally torn apart.
Only snow and ice satisfy the farmer. Because underneath, the plants lie protected as if in a down bed.
Loose snow contains a cushion of air. Air is a bad conductor of heat and therefore insulates. You can also see this when you watch birds when it is very cold: They sit there with fluffed feathers.
Have you ever seen the early plants around you melt the snow? Unlike the radiation-repellent snow, they are dark and absorb the warming solar radiation. They are heated up and radiate some of the heat to the environment. This time, however, as infrared radiation that is absorbed by the ice. 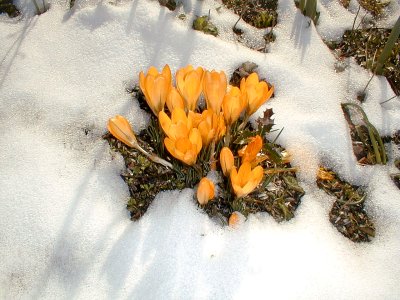 And why does ice protect?
Ice is also a good heat insulator. Provided, of course, that it is not too cold. In addition, the ice at the border with the plant guarantees the equilibrium temperature of 0 C.
Fruit growers protect their flowering fruit trees from the night fruits that are still possible in spring by even spraying the flowering trees with water. An ice sheet forms around the flowers. First of all, the heat of crystallization released in the process heats up the flowers. But that's only enough for a few minutes. No ice crystals form in the flowers up to minus 0.5 C. How do you protect the flowers all through the colder night?
Ice only becomes really hard and firm from minus 6 ° C. Before that, the ice is permeable because it is softer. In addition, it was created by freezing water mist and is accordingly porous. Think of hoarfrost! If you continue to spray all night long, the warm water droplets reach the plant surface continuously and generate new heat of crystallization that keeps the plant cell alive.

For freezing fresh food
And why does freezing of food not destroy tissue? Why aren't the strawberries bought frozen when they thaw? Indeed, they would if you freeze them slowly. So if you slowly cool fresh parts of plants in the freezer at -20 C, they will become mushy when thawing. But if you shock-freeze them in liquid nitrogen at -196 C, a glass-like ice modification forms in the cells. It shows no increase in volume and no sharp crystals that could destroy the plant tissue. This is why the plant-based foods stay crisp and fresh, as if they have just been picked!

Natural antifreeze
What if it really freezes a lot? Then the plants, which are adapted to our cold climate zone, have a trick ready: They break down starch quickly. The glucose molecules thus formed act as an antifreeze agent. This is because the freezing point of water decreases as the concentration of particles that are readily miscible with water increases.
We use glycerine, glycol and other alcohols for our antifreeze in the car.

Further texts on the subject of `` water ''