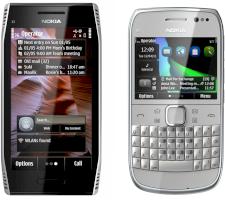 Nokia X7 (left) and Nokia E6
Photo: Nokia The new Nokia E6 and Nokia X7 smartphones and the Nokia N8 in pink can now be pre-ordered from the Finnish mobile phone manufacturer's web store. The smartphone models E6 and X7 run under the new operating system version Symbian Anna, which will also be available in summer as a firmware update for the previous Symbian ^ 3 smartphones Nokia E7 Communicator, Nokia C7 and Nokia C6-01, and both cost more than 400 euros without a contract. The more expensive of the two Symbian Anna devices in the Nokia online shop is the X7 with a retail price of 459 euros plus shipping costs. Nokia sends the E6 (429 euros) to buyers without additional shipping costs. The Nokia N8 in pink is available for 404 euros. When buying the N8 with Symbian Anna, buyers also receive a shopping voucher or a travel voucher worth 100 euros in the Nokia web store.

Nokia X7 (left) and Nokia E6
Photo: Nokia Nokia has not yet revealed when the ordered devices will be delivered to buyers. At the moment, the manufacturer is still talking about a launch in the second quarter of this year - that would be the end of June at the latest.

The Nokia X7 is an 11.9 millimeter flat smartphone with a capacitive AMOLED touchscreen with a screen diagonal of 10.2 centimeters, a resolution of 640 by 360 pixels and a surface made of scratch-resistant Gorilla glass. For mobile data transfers, the Nokia X7 supports HSPA with data transfer rates of up to 10.2 Mbit / s in the downstream and 2 Mbit / s in the upstream. The device also allows free access to Internet services via WLAN n. Other interfaces are Bluetooth 3.0, micro-USB and a 3.5 millimeter jack for standard headphones. There is also an 8-megapixel camera with video recording in HD quality (720p), a media player and an FM radio, and there is a slot for exchangeable memory cards in microSD format with up to 32 for storing photos, videos and songs GB ready. To use location-based services, the Nokia X7 is equipped with a GPS receiver (A-GPS). 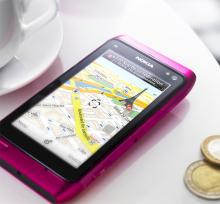 Nokia N8 in the pink edition
Photo: Nokia The Nokia E6 succeeds the messaging devices Nokia E71 and Nokia E72. It has a TFT touchscreen that measures 6.2 centimeters diagonally and has a resolution of 640 by 480 pixels, as well as a real full keyboard in QWERTZ format. The rest of the equipment in terms of data transfer, multimedia and connectivity is the same as that of the Nokia X7. However, according to the manufacturer, the Nokia E6 offers talk time of up to 14.8 hours, which is more than twice as long as the Nokia X7. The software scope includes the QuickOffice program.

If you don't necessarily have to have the Nokia N8 in pink, you can now get this smartphone model for prices starting at just over 320 euros without a contract. That would be at the level of the price that Nokia charges for the device if you offset the value of the shopping or travel voucher. However, when buying the N8 in the open market, users can use the 100 euros they have saved as they see fit. The two Symbian Anna smartphones X7 and E6 are already promoting online retailers for lower sales prices than in the Nokia web store: The prices without a contract for the X7 start at just under 420 euros, those for the E6 at just under 385 euros. Price comparisons on the Internet such as guenstiger.de or evendi.de provide cheap offers for the new Nokia smartphones and other cell phone models.

Nokia shows the X7 in a short video