What is superparamagnetic material

Superparamagnetism, also superparamagnetic effect, describes the magnetic properties of very small particles of a ferromagnetic or ferrimagnetic material, even at temperatures below At the Curie temperature, no permanent magnetization can be maintained if a previously applied magnetic field has been switched off.

Depending on the substance, superparamagnetism occurs below a certain particle size. 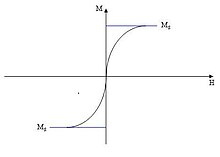 The hysteresis curve of a superparamagnetic substance. It describes the magnetization M as a function of the applied magnetic field strength H. Ms is the magnetic saturation at which even a large gain in H does not cause any particular gain in M.
M.s has different values ​​depending on the substance. Noticeable: after switching off the magnetic field, there is no remanence (curve runs through the origin).

Superparamagnetism occurs below the Curie temperature, but above a certain temperature dependent on the material and the particle size, which is known as blocking temperature is called.

Superparamagnetic particles are so small that they only form a magnetic domain.

In magnetic data recording, e.g. B. on hard drives, the superparamagnetism represents a physical upper limit of the possible recording density, because very small magnetic grains are required. The reduction in size leads to greater sensitivity to thermal excitation and can lead to a spontaneous loss of magnetization and thus of the stored information.

Therefore, attempts are made to use materials with the highest possible magnetic anisotropy for hard drives. However, this is only possible to the extent that these can still be magnetized by the write head.

Brief heating can make it easier to remagnetize (write) such materials. This method is known as the HAMR technique. heat-assisted magnetic recording) and should enable an increase in the recording density of future magnetic storage media.

Another way to increase storage densities is to use only one per bit instead of many magnetic grains (a few hundred). Then, despite the use of larger grains, very high recording densities can be achieved; however, these grains must be arranged in such a way that the read and write head of the hard disk can follow the rows of grains. Such storage media can be used with the help of lithography techniques such. B. produce electron beam or ion beam lithography, but so far only exist in the laboratory and are as patterned media known.