Three hours after the closing of the first polling stations in the US presidential election, the first predictions are available: The Democrat Barack Obama has won the embattled key states of Ohio and Pennsylvania. No candidate has won the election since 1960 who did not win in Ohio. Pennsylvania is another of the crucial states. Four years ago the Democrat John Kerry won there. This time, however, the Republican John McCain had led a particularly intense election campaign in Pennsylvania to get that state on his side. The results from other "swing states" such as Florida and Virginia with a relatively high number of electoral votes are now awaited with great excitement.

According to the broadcaster, Obama won, as expected, in the states of Connecticut, Illinois, Maryland, New Hampshire, New Jersey and New York, which were already part of the democratic camp before the election. McCain conquered the traditionally republican states of Georgia, Texas, Utah, Kentucky, Oklahoma, South Carolina, Tennessee and West Virginia, among others. 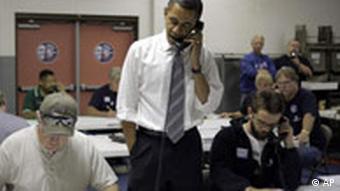 Last minute election campaign: Obama advertises himself on the phone

According to polls, Obama was the clear favorite in the elections. However, McCain (72) had been confident until the last minute that the mood would change at the last minute and that he would emerge from the race as the winner.

In addition to the president, US citizens also elected the House of Representatives and a third of the members of the Senate. According to initial projections, things also looked good for the Democrats in the congressional elections. Accordingly, their candidates in Virginia, North Carolina and New Hampshire were able to win Senate seats that had previously been held by Republicans. This meant that the party had a majority of at least 52 of the 100 senators. So far, Democrats and Republicans each had 49 senators.

Traffic jam in front of the polling stations

As early as four in the morning - hours before the polling stations open - long queues had formed in some cities. In several cases there were considerable delays in voting, for example because of incorrect ballot papers or electoral lists. Voters also complained in many places that there were nowhere near enough voting machines. 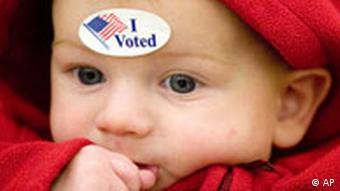 Even he claims to have voted - surely cheated

A record turnout of up to 130 million voters is expected. In the presidential election four years ago, only around 121 million citizens took part. In the past few weeks, almost 30 million voters had already made use of the option to cast their votes early.

A failed plane landing increased the excitement of election day for McCain: At the last minute, his pilot had to cancel the landing in Albuquerque, New Mexico, on Tuesday (local time). McCain's campaign plane "Straight Air Talk" was already on the approach when the pilot suddenly pulled the Boeing 737 back up about 90 meters above the ground. After another lap, the machine finally landed safely - followed by applause from journalists and the crew

In the United States, the president is not elected directly, but by an electoral body made up of representatives from the individual states. These traditionally vote according to the result in their countries. The winner of a state receives all electoral votes to be given. The electors will vote on December 15th, and the new president will finally take office on January 20th.

At the same time, all 435 members of the House of Representatives and 35 of the 100 senators were to be elected. According to polls, it was expected that the Democrats could significantly increase their majority in both chambers of Congress. In addition, eleven governor posts were filled. In numerous states there were also referendums on various topics. In California, for example, voters voted on the permissibility of gay marriages. (sams)