The great thing about UltraStar is that it's open source and anyone can create songs for it. And we can sing these songs on our karaoke nights. With each time there are more song requests, many of which are already entered in the media library. In the meantime, however, there are also a number of songs that are still missing from the media library. So that all of these missing songs can be added, you can create songs yourself. This HowTo should help.

Instead of this HowTo, there are of course many instructions on the Internet. For example, the following are recommended:

Why is that so much work

There are also some optional files:

The part that takes a lot of work is creating the karaoke dates. It says at what time which note has to be sung for how long, where there are pauses, how long a line is, etc. That is also the only part of the process that is very difficult to automate. And that's exactly what this HowTo is about.

What is necessary for an UltraStar song [edit]

In order for the songs to be included in the UltraStar media library, at least the following files are required:

It is important that the song, the video and the karaoke data match. There are tons of versions of songs that are not compatible (different speeds, different lengths, etc.) around the internet. Make sure that TXT and MP3 / Video fit together.

If everything goes well

In the simplest case, you can find a suitable version of the song online. One of the sites on which UltraStar songs can be searched is usdb.animux.de. TXTs for UltraStar are collected there (you have to log in to download files). If you can find the song you want there and have a suitable MP3 / YouTube video for it, you can jump straight to step 6 in the instructions below.

The following steps assume that you haven't already found a suitable version for your song. If you already have a song file and a suitable MP3 file, you can jump directly to step 7. If you have a MIDI version of your song, check out this tutorial.

The first thing you need is an MP3 version of your song. It is advisable to take a music video version (e.g. from YouTube), if there is one, as it then fits directly with the video. In this case, also make a note of the link to the video so that the appropriate music video can be added later.

Finding the lyrics is usually easy. Just search on Google. If you have found a version of the song (e.g. at usdb.animux.de) for which there does not seem to be a suitable MP3, you can also take this version and jump directly to step 4.

Next, the lyrics must be converted into a format that UltraStar can understand. We use this step to roughly determine the lengths of the individual syllables. In the tutorial I mentioned above, SongEasy is used for this. But I find that it is easier with the UltraStar Creator.

Now the work begins. Start Yass and set up your library there (if there is no pop-up when starting, go to File> Set up library). Enter your folder with the songs under "Songs". The folder you specify here is not the folder with the TXT and MP3 files, but the folder above. E.g .: 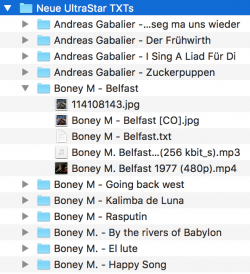 In this example I would select the folder “New UltraStar TXTs”. After choosing the folder, Yass should load the files and display them in the list on the left. If not, click on "Update Library". Now do the following:

My recommendation is to only rely on the clicks for tone lengths if you are setting tone lengths. Make sure that the keyboard Not activated (see next step).

After the note lengths have been set, the hardest step is done. Only the pitches are missing. To enter the pitches yourself, do the following:

Now the song is basically ready to be used at UltraStar. All that remains is to bring all files together. There are still missing:

Once all of these steps have been completed, the song can be uploaded for the UltraStar evenings. To do this, you have to be a member of the karaoke club. Alternatively, you can simply send the finished song to a member of the karaoke group for upload. The song should be uploaded to the OwnCloud in the shared folder "Karaoke-AG / New Songs". The song should Not loaded into the "Sorted Songs" folder, as this folder may be partially deleted when songs are sorted and new songs would be lost.

Once the song has been uploaded, you can optionally inform the karaoke group about the new song so that it is sorted as soon as possible and is available for the UltraStar parties.